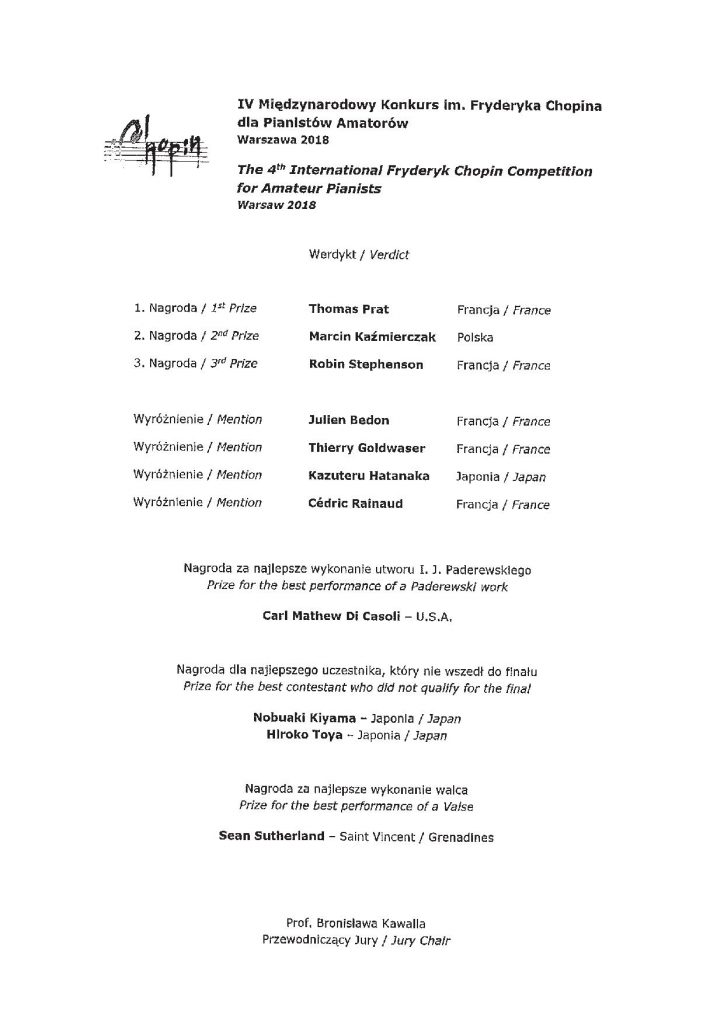 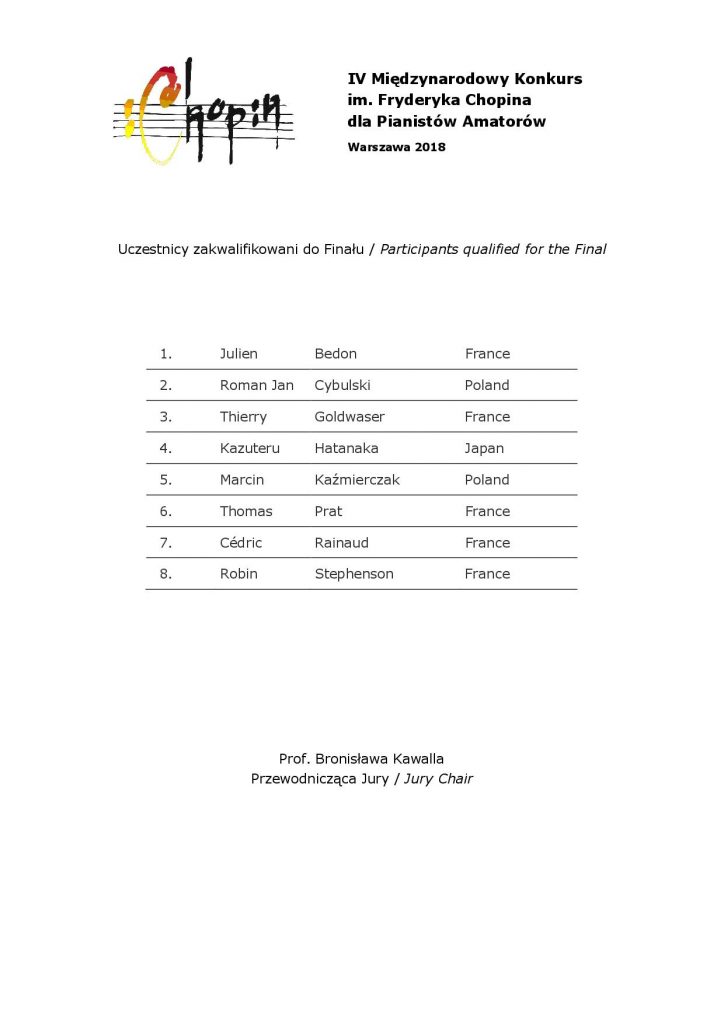 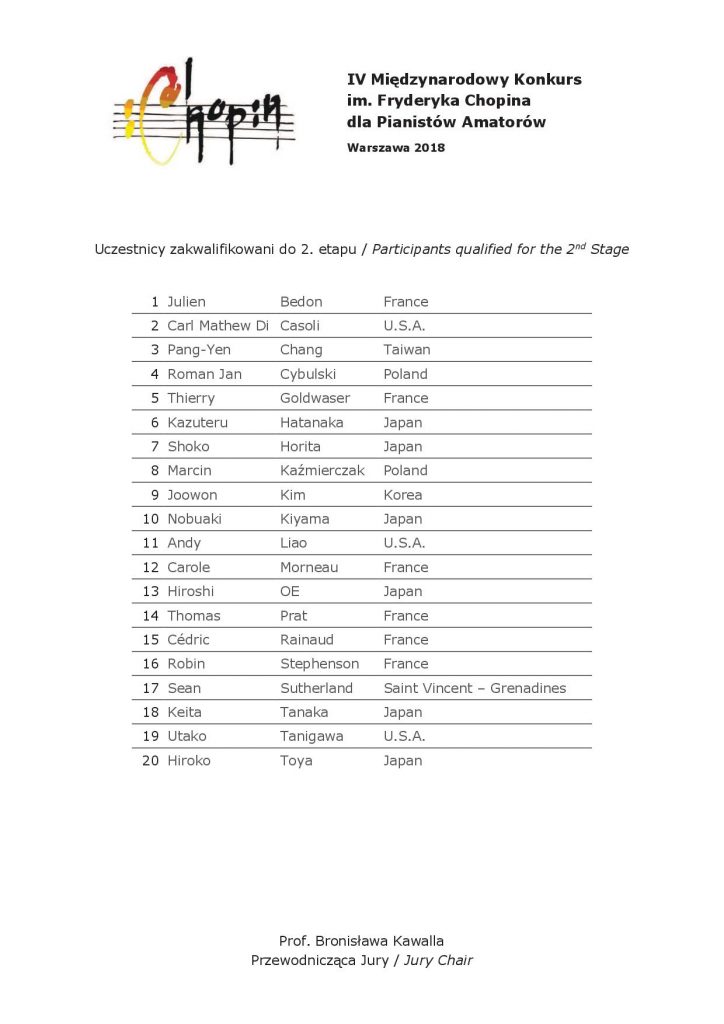 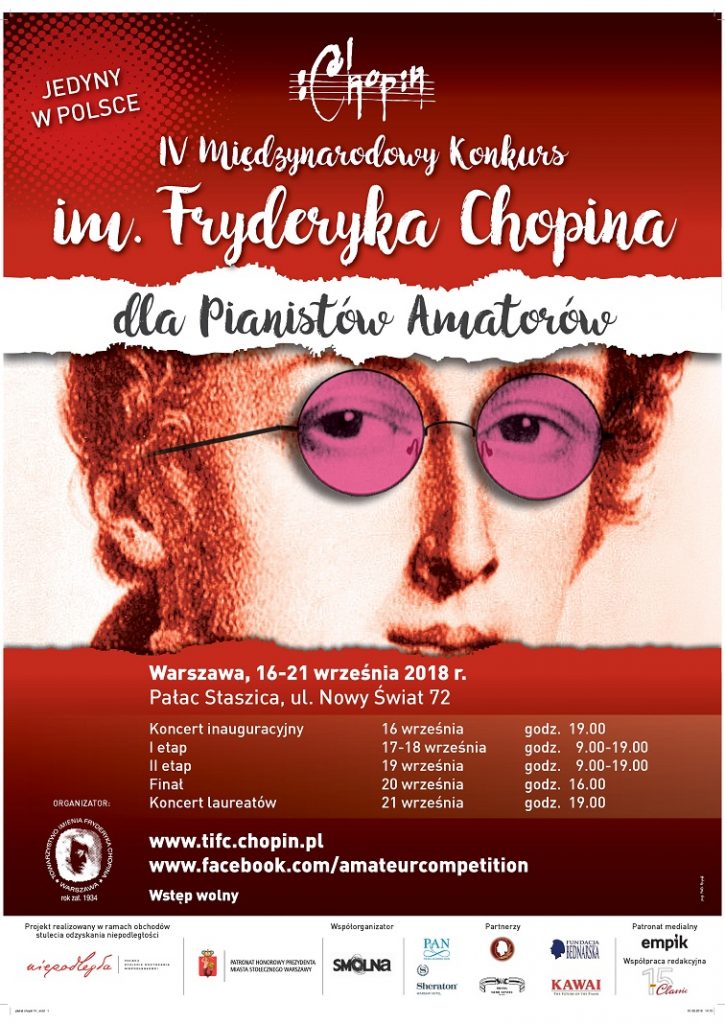 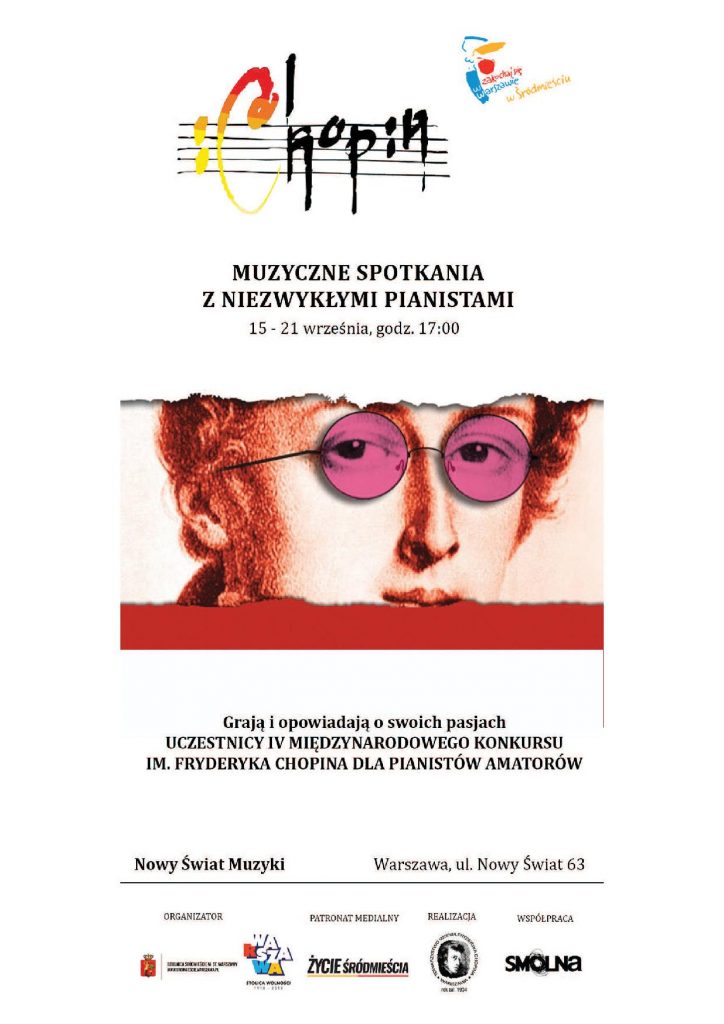 We are pleased to invite you to participate in the fourth edition of the Competition to be held from 16-21 September 2018 in Warsaw.  We hope that pianists from all over the world, for whom playing the piano is a passion rather than a way of earning a living, will find participation in the Competition an attractive proposition.
The rules of competition basically remain unchanged (see Rules).  However, since in 2018 Poland will celebrate a hundred years of regaining independence, we have introduced a new requirement.  Participants will be required to perform a piece by Ignacy Jan Paderewski of their own choosing.  Our intention is to honour Paderewski, a great pianist and composer, Chopin’s spiritual heir, but also a prominent politician whose tireless efforts largely contributed to Poland regaining her independence in 1918.

The deadline for receiving applications is 14 April 2018.

Documents to be enclosed with the application form should include:

a. short biographical note (in Polish or English), clearly indicating the candidate’s professional career,
b. photocopy of document indicating date of birth (translation into Polish or English should be provided),
c. one digital, high-resolution photograph,
d. list of works to be played during the Competition (1st stage, 2nd stage, final), including the length of each piece,
e. a CD, DVD, memory card, pen drive or a sound file (MP3,Wav) with the candidate’s recording of works by 18th - 20th century composers, including one piece by Chopin, approx. 20 minutes in length,
f. record of application fee payment of 50 Euro or 60 USD or 200 PLN. If the applicant is accepted, there will be an additional payment of 100 Euro or 120 USD or 400 PLN.

The Commission will be appointed by the Fryderyk Chopin Society.

The Competition Director will chair the Commission’s meetings.

Music can be purchased on-line: https://pwm.com.pl/en/sklep

Works played in a previous stage may not be performed again.

It is recommended that pieces be played from memory, but playing from music is allowed.

Should a contestant overrun the time limit, the Jury Chairman may stop their performance.

The participants will transfer to the Fryderyk Chopin Society free-of-charge their copyrights arising from:

The participants will transfer the above-mentioned rights free-of-charge, so that the Fryderyk Chopin Society can use these rights without any time or territorial limit for the purpose of:

The above-mentioned rights will be exercised in the areas indicated above by persons, companies, radio and TV broadcasting stations and recording companies authorised to do so by the Fryderyk Chopin Society.

The Competition Director will make all decisions on organisation-related matters exceeding the powers of the Jury.  His decisions will be final and incontestable.  In case of doubt the Polish language version of the Rules will be used in interpreting and clarifying their provisions.  Any matter not provided for in these Rules will be subject to Polish law, and any disputes will be settled by a court of law in whose jurisdiction the registered office of the Fryderyk Chopin Society is located.

Do NOT follow this link or you will be banned from the site!